GROWTH ASSESSMENT / GROWTH DISORDERS (A GUIDE FOR PARENTS AND PATIENTS)

Once the diagnosis is established, there is little to do but separate such children from the adverse environment. Away from home, even in hospital where the reversibility of hypopituitarism can be demonstrated, the catch-up growth is usually spectacular being as good as that of a growth hormone deficient child who is given growth hormone replacement therapy.

There are lesser degrees of this problem in which children grow at a sub-optimal rate when in a disturbed environment. It is not unusual to see “spontaneous” catch up growth in a short child after a period of time (i.e. if parents separate or if there has been a move of home or school.

Diagnosis : Majority of cases should be diagnosed by age 2
Treatment : GH approved for treatment from the age of four years

Under-development of a baby in utero may be due to a problem with the fertilized ovum, the placenta that limits the supply of foods and oxygen to the fetus, or to disease or malnutrition in the mother. Certain of the first, and all of the second and third types of problem lead to poor growth of the baby and hence lead to a small size at birth. This smallness of size may be known only through weight. Though length would often be more informative, it is unfortunately not routinely measured in hospitals in India, although accurate apparatus for measuring length now exists.

Standards for birth weight and length are available for each week of gestational age; the centiles are different for girls and boys and for first-born and later-born. We are concerned here only with small-for-dates babies i.e. those who are below the centile limits for weight at their particular gestational age.

Babies who are simply born early, i.e. more than 32 weeks, and who are at the normal weight for that length of gestation, usually catch up to a perfectly normal height. Studies are currently ongoing to assess growth and “Catch-up” in very premature babies (i.e. <32 weeks gestational age). Indeed ‘catch-up’ growth may occur up to the age of six years, although more usually this commences during the first year of life. Small-for-dates babies may be born at term, or may be born after a shorter gestational period.

Russell Silver Syndrome
The majority of small-for-dates children, particularly those born at term, grow within the normal centiles. However, they do not fulfit their genetic potential and so are often small for their parents’ heights. Their average height centile seems to be about the 2nd. Others, however, fail to catch up in this way. They remain very short, lack subcutaneous fat and have a characteristic facial appearance. The face as a whole is triangular, with large eyes and small lower jaw; the forehead is large and prominent in relation to the face, and the ears are set low in the head and tend to stick out. The bridge of the nose is usually depressed and the mouth turned down at the corners. A proportion of these children have marked asymmetry of the limbs or body, one arm or leg being longer than the other, or one side of the face or chest more developed. The condition constitutes a specific syndrome known by the name Russell Silver after the two pediatricians who independently described it in the 1950s. Educational development often requires extra help. 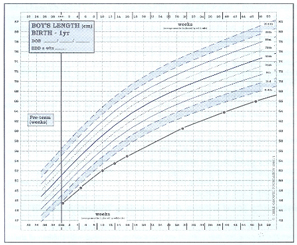 It is very important to provide calorie supplements and usually a more aggressive approach for calorie supplements may require gastrostomy tube. Children with Russell Silver syndrome commonly have reduced calorie intake for several reasons, including a high-arched palate, decreased appetite and gut dysmotility. It is very important to involve the opinion of a paediatric gastroenterologist at an early stage. Growth hormone treatment is now licensed for short children with intrauterine growth retardation/Russell Silver syndrome, but only from 2 years in USA & 4 years in UK. Growth hormone treatment not only improves the short-term growth rate, but also improves final height attainment. There may also be important benefits by improving blood sugar control (see below). These children are healthy and active, though usually very thin but should not be regarded as delicate. In middle childhood they put on some subcutaneous fat and their puberty occurs at a slightly earlier time but in the normal sequence. The syndrome hardly ever occurs twice in the same family, so the mother of such a child can be reassured about the subsequent pregnancies.

The cause of the disorder is unknown, although in a small proportion of mildly affected children there is a chromosomal abnormality. The prognosis may be improved by the treatment given to low birth weight babies nowadays, which consists of feeding them more intensively than before. This may also be important in the prevention of hypoglycaemia (low level of sugar in blood) which is more common in these babies.