GROWTH ASSESSMENT / GROWTH DISORDERS (A GUIDE FOR PARENTS AND PATIENTS) 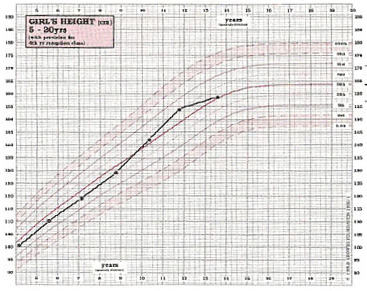 If reassurance does not completely satisfy the patient then there are, at present, two options for treatment. When the anxiety only concerns height, the first line of treatment is the mild anabolic steroid, oxandrolone. This makes no difference to final height but it does initiate the growth spurt a little earlier than would occur with no treatment. If a boy is also concerned about his lack of pubertal development then testosterone, the male sex hormone, can be used. In girls, low dose estrogen can be used. It should be emphasized that these forms of therapy require careful monitoring by specialists experienced in the treatment of growth problems.

The two main endocrine disorders that cause short stature are growth hormone deficiency and thyroid deficiency.

Diagnosis : If MPHD (see below) at birth. If solely GHD possible by 18 months. 80% of cases of GHD should be diagnosed by school entry.
Treatment : Growth hormone (GH) replacement therapy.

Growth Hormone Deficiency (GHD) is generally due to the pituitary gland being unable to produce sufficient GH to generate the growth process. GHD does not affect intrauterine growth, at least to an extent measurable by birth weight or length, but from the second year of life growth is slower than normal and occasionally growth failure commences from birth. Most cases of growth hormone deficiency are idiopathic, meaning of unknown origin. Idiopathic growth hormone deficiency occurs, it seems, in about 1 in 3800 births.

GHD may also be hereditary, at least in some cases. About 3% of children with GHD have brothers or sisters who also have the disorder. In a very few families one of the parents is affected. The deficiency is two to three times more common in boys than in girls, for reasons quite unknown.

Children with GHD are small with normal skeletal proportions, facial appearance and intelligence. They tend to be overweight (this reduces during GH treatment) and they often have a delayed bone age. The diagnosis is confirmed by measuring the level of growth hormone production in response to a stimulation test, which normally requires a morning in hospital. The deficiency may be of growth hormone only, although other pituitary hormones may also be affected (MPHD).

The associated hormone deficiencies are :

If there is a deficiency of TSH, thyroxine is given, and if gonadotrophin deficiency becomes apparent at the time of puberty (which is usually late in growth hormone deficient children), the sex hormones have also to be given and treatment can initiate sexual maturation. Very occasionally antibodies develop to the injected growth hormone treatment and cancel out the effects of treatment but this is extremely rare with more modern biosynthetic human growth hormones; otherwise side-effects are unusual.