There are Down’s Syndrome charts to monitor the growth of any child so diagnosed.

Diagnosis : Possibly in-utero [ultrasound/amniocentesis], at birth by physical characteristics, pre-school entry by growth failure and subsequently by delay of puberty.

Treatment : GH, anabolic and sex steroids (& combinations of these)

Females normally have two X-chromosomes. The lack, partial lack, or abnormal formation of the second X chromosome produces the condition called Turner Syndrome. It is one of the most common chromosome disorders and occurs in 1 in 2500 live female births.

Girls with Turner Syndrome have normal intelligence, though in some cases it is associated with specific learning difficulties. They also have short stature with or without some physical characteristics such as puffy hands and feet soon after birth, webbing of the neck, broad chest, small nipples and characteristic face, Bone age is delayed only slightly or not at all.

The diagnosis is confirmed through examination of the chromosomes from blood cells (karyotype) and occasionally other body tissues such as skin. In early childhood, feeding difficulties may occur as well as frequent ear infections.

Short stature is the most common feature of Turner Syndrome and girls with this syndrome are often slightly small at birth. The average adult height is about 147cm, although a few may reach 152 cm (5ft., 2ins.) Parental height plays the most important role in determining the adult height of girls with Turner Syndrome and a girl with tall parents is likely to be taller than a girl with short parents. 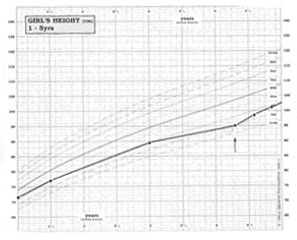 Although growth hormone secretion is nearly always normal, many studies have demonstrated that by giving additional growth hormone, there is a dramatic increase in growth rate and GH treatment is licensed for the treatment of short stature in girls with Turner Syndrome. The increase in final stature is variable and is dependent on the age of starting treatment. The mild anabolic streroid, oxandrolone, in combination with growth hormone, is under investigation, as is the optimum age to start low doses of oestrogen treatment.

Lack of sexual maturation during adolescene is another feature of Turner Syndrome. This occurs in the majority of girls because the ovaries do not develop normally to produce oestrogen. The missing, or abnormal, X chromosome affects ovarian function and this has to be explained to the parents and child.

At the appropriate age, girls with Turner Syndrome are given oestrogen replacement therapy, in gradually increasing doses, to stimulate breast and public hair development. In due course regular uterine withdrawal bleeds that are important for keeping the uterus healthy are introduced and girls with Turner Syndrome commonly wish to start their periods at the same time as their friends. These withdrawal bleeds can be produced by giving oestrogen and progestogen for 3 weeks, followed by a week without treatment. It is important that these girls, and their parents, understand that the uterus and vagina are normal and so with the new techniques of in-vitro fertilization (“test-tube”), and with an egg donated from another woman, there is the potential for fertility.